Get your mouth watering for 23 November!

Paléo Festival Nyon today revealed the visuals for its next event, featuring a lively, pop and expressive universe that places diversity and inclusiveness at the heart of the poster.

Mark it down: the 2022 headliners will be revealed on Tuesday 23 November. The traditional X-Mas ticket office will open on 24 November for six-day passes and on 1 December at noon for daily tickets.

Paléo Festival Nyon is delighted to announce that it will reveal the headliners for 2022 on Tuesday 23 November. The traditional X-Mas ticket office will open on 24 November for passes and on 1 December at noon for daily tickets. The rest of the programme (up-and-coming artists, Village du Monde, La Ruche, etc.) will be unveiled at a later stage. In the meantime, Paléo has revealed its new visual identity, a nice way to make your mouth water for next year’s Festival! 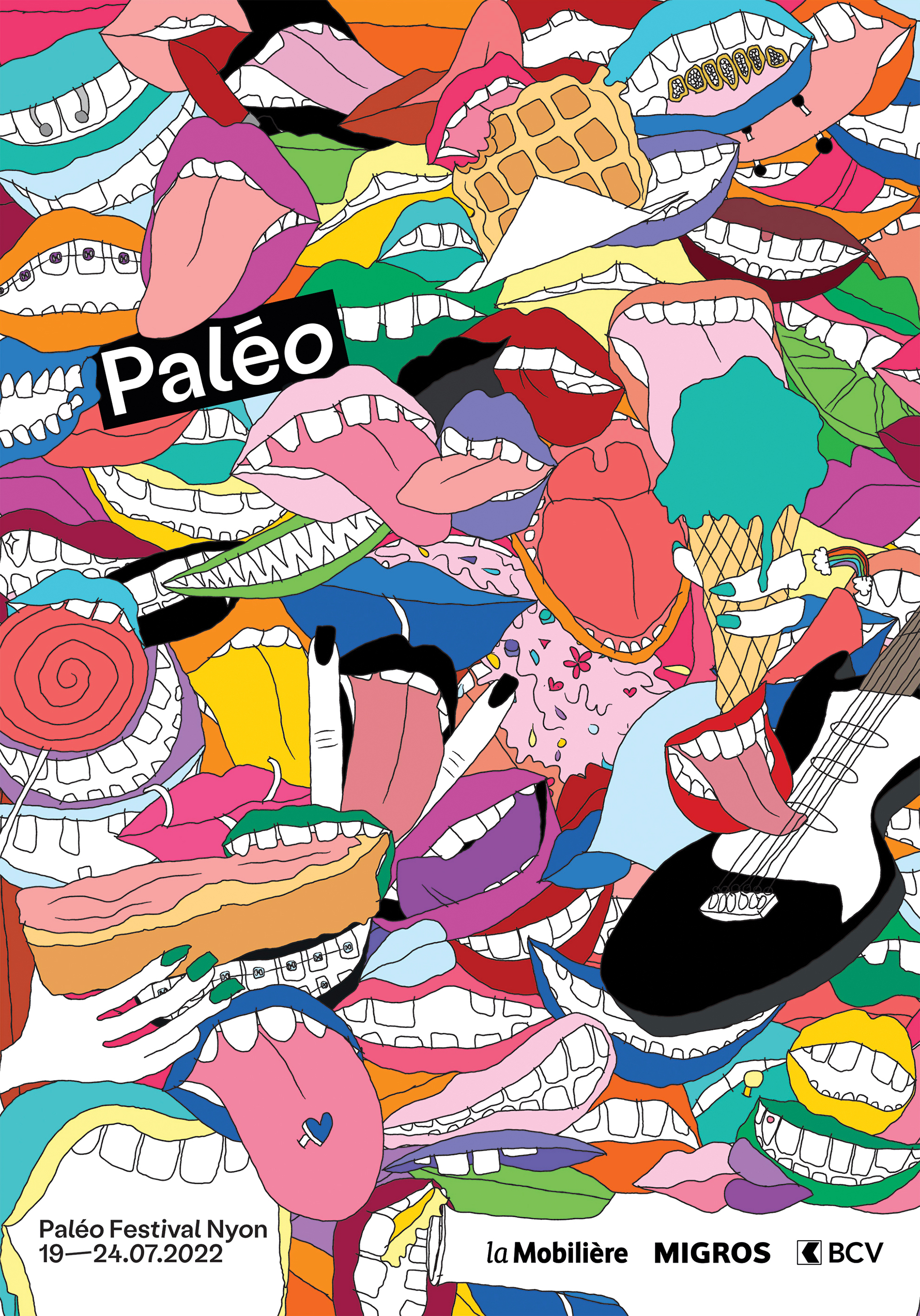 A BA graduate in Visual Communication, Julietta Saccardi is the winner of a workshop led by the Geneva agency BaseDesign at HEAD – Genève, Geneva University of Art and Design. Today she presents us with the fruit of her labour: a universe that is pop, offbeat, brightly coloured and expressive, all in one; a nice way to whet our appetite for the next Festival!

“I was inspired to create this visual identity by looking at photos and videos taken at the Festival. One element in particular caught my eye: the mouths! Everywhere in these images people are eating, singing, laughing, shouting, smoking, screaming or kissing. I wanted to showcase them and come up with a design that was both universal and inclusive, while at the same time highlighting the individuality of each person. After all, mouths are one of the ultimate tools to enjoy Paleo…”

All the mouths and elements that make up the visuals were drawn by hand, then vectorised to be used on different media. The outline is the same in order to preserve a degree of unity, but the colours are varied to enhance the contrasts and accentuate the poster’s pop and vibrant aspect. Once the elements had been drawn, they had to be assembled. Julietta Saccardi wanted the compositions to be abundant in order to represent the diversity of the public and, more broadly, to showcase the Festival. “I wanted to give this project a human, intimate, fun, slightly punk and offbeat feel, because that’s precisely what Paléo evokes to me.” A wide range of mouths and various elements were thus created, allowing the project to be adapted as required to represent the Festival in its entirety. “It was also a sort of tribute to those mouths that we’ve seen so little of in recent months, because they’re hidden by masks.”

Julietta Saccardi has thus given the Festival a strong new visual identity, much like the 2022 event!